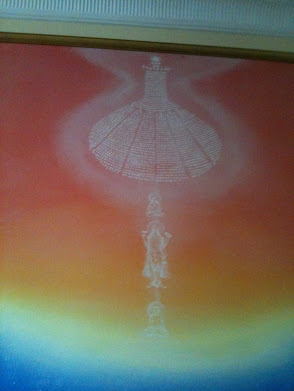 Thank you for your follow up question.
It is a good question and I will explain to the best of my ability having gyan as the supporting block.

Note the picture of the inverted tree and the 3 worlds above. That picture is not meant to be taken literally for it has many mistakes according to “pure” gyan. It is just a representation to express what otherwise will be hard to explain.

The above is the standard explanation on a Raja Yoga course. Is the above explanation the truth? 🙂
If you are a Brahmin soul, you will say YES. It is the truth, because God has said so. Right?

However, as explained in the article about the subtle bodies; in a region where time does not exist; there is no location as we know it. Neither a “soul comes down.” there is no place to come down. That is “bhakti.” So, I can “refine” the understanding of something which we have repeated for years without full understanding.

The picture of the “inverted tree” is not there to show us “location” and place of every soul. It is there to explain to us that our understanding is referential to our number. A soul who originally belongs to Christianity it is set to understand whatever Christianity teaches as being “right.” These souls will not understand what you perceive as the “truth.” (Baba’s gyan)

It is like the old saying: “If a tree falls in a forest and no one is around to hear it, does it make a sound?” this ‘truth” is something which many individuals have not understood yet.
A Christian soul is not meant to understand a “Brahmin soul’s truth” just because that Christian soul does not have the experience of the Golden and Silver ages. However, we like to refer to those who do not understand gyan as “stone intellects.” Nothing further from the truth. See?

What is the truth?

i would like for anyone to tell me one “truth” and i wilt make sure to show you that it is not by using someone else’s ideology or philosophy which they found to be true…
Yes, we say ‘God is the truth.” Let me ask you: What does that actually mean? 🙂
God never changes. That is the “truth.” Right?

Wrong. BK gyan is the perfect example of something that has been changing in time… and if it comes from God, then it should never change right? 🙂
See that things are explained according to the understanding of some. Otherwise, there will not be understanding.
I am allowing this role to go deeper this time, so bear with me.

A good friend of mine, explained to me that the “truth” is like a growing “llanten” plant. (Plant found in Peru, used for medicinal purposes. It has medicinal properties when it becomes an “adult” plant.) Some will see the baby plant and will find that it does not have any health related properties and will call the Llanten as an “useless plant.” Others will see the plant in a particular growing stage and describe the plant in that stage as the “truth.” Yet some others fill find the plant medicinal properties, when the plant is fully grown and they will “debate to death,” with those who “defame” the plant as “not having any medicinal related properties.”

See the teaching? I can say the “truth” is like a growing plant; but I cannot say that “the truth is a growing plant.”
To say: “This is the truth,” is to lack depth in the teachings which gyan is giving us.” Note that I am not saying that without depth, whatever you say is false. Just a different understanding, a different view of the plant from a different perspective; that is why Baba talks about the unlimited, for here we see the plant growing, rather than being stuck in a particular stage of the plant growth. That is why I mentioned that the truth is like a movie rather than a picture. (In an article here sometime ago.)

This is why I say that the ‘truth is a paradox.’ Sure, I am saying this is “it” (thus contradicting what I just said – I like that- 🙂 ) BUT, a paradox is like a movie as well, many scenes that we can come up with according to our understanding. According to our awareness. Those “scenes” defy any logic, any analysis, any reason… Paradoxically; here is where the depth in Gyan resides.

Moreover, Baba says that the truth “does not need to be proven.”

You know why? 🙂
Because those who are meant to understand, will do it.. BUT in a “numberwise” way. Isn’t that what gyan teaches us about the Drama?