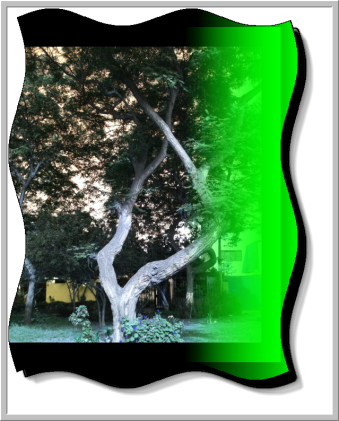 This is a casual talk between Mathias, a wise tree; and Ananda, an “old child” with interesting questions…

Ananda: Mathias, I have a question: If the cycle of time lasts 5000 years and every star in the sky is moving. How is it possible that I will observe the same stars in that same location every 5000 years?
Mathias: You have to have faith…
Ananda: I want to understand. Mathias. 🙂
Mathias: When the cells of an animal are ingested, do those cells form part of the one who eat the animal?
Ananda: We can say that yes and No. The cells are there but they are not the same cells ingested previously for they are transformed into fuel which goes through the circulatory system.
Mathias: Interesting answer, friend.

Mathias: We will talk about quantum physics. Do you know about it?
Ananda: Sure. It is the world of electrons and atoms. Where those can be potentially in many locations until the observer is conscious of them.
Mathias: Something that is in one side can be in another side at the same time?
Ananda: In classical physics that cannot be possible. In quantum physics that is perfectly possible.
Mathias: How does that occur?
Ananda: Because in quantum physics we talk about elements without matter. So there is no location.
Mathias: No? Why not?
Ananda: Because at that small level, there is no matter per say; but waves, energy; so there is no location, ubication.
What is interesting is that something that doesn’t have mass makes up something “bigger” that has mass.
Mathias: Something that doesn’t have locality makes up something that has ubication….
Ananda: Yes!

Mathias: What was your question?
Ananda: If stars move and they have different movement, how is it possible for them to be in the same location in 5000 years?
Mathias: You mean, they have one ubication and one locality….
Ananda: Exactly. How is that possible for the same star to be there in 5000 years?
Mathias: What you have spoken with me doesn’t answer your questions?
Ananda: Yes, but we are talking about stars, celestial bodies which have mass and locality.
Mathias: And that mass and locality is there and is not there…
Ananda: Then we are saying that everything could be real or not real…
Mathias: It depends on what?

Ananda: Depends in my understanding. Which depends on the role which is destined for me to play.
Mathias: Then, if that is destined, then … what you don’t understand?

Ananda: What I don’t understand is how is possible that when I see the sky in 5000 years the starts will be there, exactly at the same position that I see them now?
Mathias: You understand… You just want to put it in words that others can understand.
You have said the exact answer. There is a part that you have said that Mathias does not agree. But it does not mean that you are wrong. It is your perception now who is taking you to this answer. That will change…
Ubication, locality, to be or not to be there; depends on our understanding.
Collective understanding makes up something. That celestial body is also matter. Matter is transforming just like the cells of that animal transforms and make up the blood of the one who ingested the animal and becomes part of him. Those celestial bodies also move. But not just in the way that human’s believe: rotation, translation … That is limited. That is like saying that you can only move by walking or running.