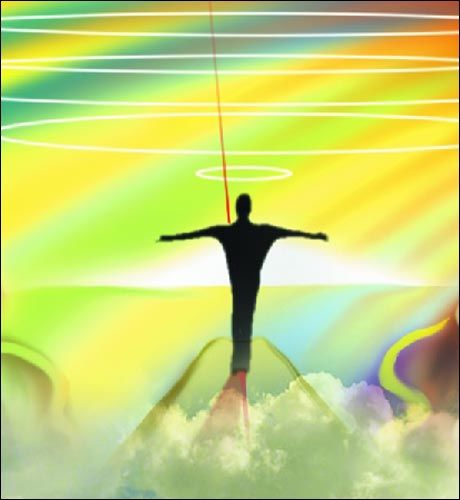 This is like meditation. In meditation our consciousness moves to a different space of consciousness.
However, we will not be able to transmit the experience through words to someone else.

For instance, If I turn vegetarian from meat eater. There is a change of consciousness when there is no longer a struggle to eat meat. Then, we will notice a difference.

If we just “list” those differences and start talking about them, others will believe that we are trying to “convert” them, to take away their “pleasure of eating flesh.” 🙂
Then, their “defenses” will be ready to fight back and they will not listen, but merely find counter arguments. Sort of: You said this, but according to so and so..what you are saying cannot be true…

That change of consciousness in itself brings a different behavior. That is how others may observe the change of behavior and ask questions, then because they are getting a reply rather than being preached; there is openness in their view which will give them the “choice” of trying something different.

This is how world transformation happens. How consciousness changes without “force” or “tricks.”

When we reside in a different consciousness than the “normal” individual, we could let ego draw lines and differentiate the ways in which we “are better” than the rest or we could use that opportunity to see something different to increase our inner motivation to find out what is next for us. To go beyond.

Once we attain a certain amount of consciousness; it could be maintained through a diligent work on our own awareness. That is, we need to clean our “container,” our intellects daily; so entropy or the pull to “be like everyone else,” is no longer felt.

This “pull” will exist; but it is not “bad,” but rather the current state of consciousness of the world as a whole.
With knowledge, we know that no one is liable for this state of affairs; but also we know that according to time; something else will come up. To prepare for that while aware of this situation; is the spiritual task. This is the “incognito” task.

Attaining a degree of awareness then, is a goal. To arrive to another state of consciousness is a “natural trip” as long as our awareness has increased. Then, It is not something that we force on ourselves, that we feel the need to reject or renounce something to attain something else.

An adult will naturally leave his toys of childhood, once there is the awareness of being over the stage of childhood. That awareness comes with a different consciousness. At that point, there is no struggle to leave those toys, thus; there is no renunciation.

Just as there is a “pull” for going into entropy, the “normal” behavior; at this time, there is also “help” to go “up above.”

Rituals and scheduled practices have been developed to maintain that consciousness in an artificial way. However, once awareness is increased and once we diligently clean up our “own containers,” there is the possibility to endure and to thrive by ourselves.

This is not something for many, but for few. It takes courage to try something new. There is a risk, but there is also a prize.