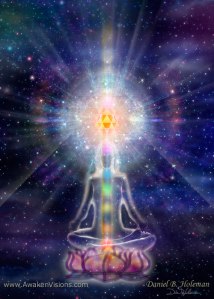 Today was the ceremony when Dacio (Raysha and Ananda’s father) was going to be part of the Totality.
He had a unique name, just as his life was.

Ananda took the glass and placed it in top of the flame.

Mathias; the wise tree, was directing the ceremony while Raysha was able to see “live” what was happening to her father in that region of light known as a “parallel world.”

Mathias: “ The once separated consciousness of the observer and the object observed no longer separates and observes but then only feels. The next transformation is to become light only to be empty and from that essence back into the Totality, the Universal intelligence. That experience is the triumph of living life.”

Ananda took the glass with water and soggy bread and drank it, representing the process of once separated things, become one into the Totality.

Raysha observed how her father was speaking with what appeared to be his ancestors during that ceremony. They told him that this is the ceremony of complete dissolution of the “I.”
Dacio lied down in what appeared to be a rock. He looked at Raysha and told her: “Thank you for everything. You promised me that you were going to be with me until the end. I promise you that I will be with you when you need me.”

Saying that, the ancestors gathered together around Dacio and raised their arms… when they dropped their arms; Dacio in his body of light was no longer there.

Mathias finished the ceremony while the ancestors left the “place.”

Mathias: “Raysha… I want to speak with you. Do you have anything that you want to say?”
Raysha: “No, Mathias. I don’t want to say anything but Thank you.”
Mathias: “What about you Ananda?”
Ananda:” Well… I wish I could have seen what was happening, but perhaps a little explanation will help me understand. Friend, Is the process to transform from physical matter into light and then back to a physical reality?”
Mathias: “From the physical to light then into the essence in emptiness which will go back to the Totality as one. Empty to be full again… and then empty to be full again.”
Ananda:” What about the ancestors that were there.. They did not go through that transformation?”
Mathias: ” They did. But once you “were” you always will be that.”
Ananda: “That is because there is no time “there.””
Mathias: “What is “there” or “here”?”
Ananda: “The manifestation of that scene.”
Mathias: “There is time because you have to go to work in a few hours, but there is no time as well, it doesn’t exist.”
Ananda: “If I look at something beautiful and then I become it, becoming one.. why that does not happen when I look at some human misery; which we could call ugly?
Mathias: “ Our essence is that beauty. If you reject or judge that which you call ugly or bad; you get trapped in it. “
Ananda: “To reject something is to become it. I don’t understand that very well…”
Mathias: “Ananda has understood already. That which is trying to understand intellectually, is not Ananda.”
Ananda: “Has this experience finished for Dacio?”
Mathias: “This experience of triumph of your father is not just a moment in time.”

Explanations are good for the mind. Experiences are for the hearts to change.
So here is the “teaching.” 🙂
Embrace life as it is, be thankful and appreciative of what is; for that and nothing else is what is supposed to be.
No need to worry about it. It is just Perfect.

Paraphrasing “Depeche Mode’s” song: “Did not tell you anything you didn’t know when you woke up today…” 🙂