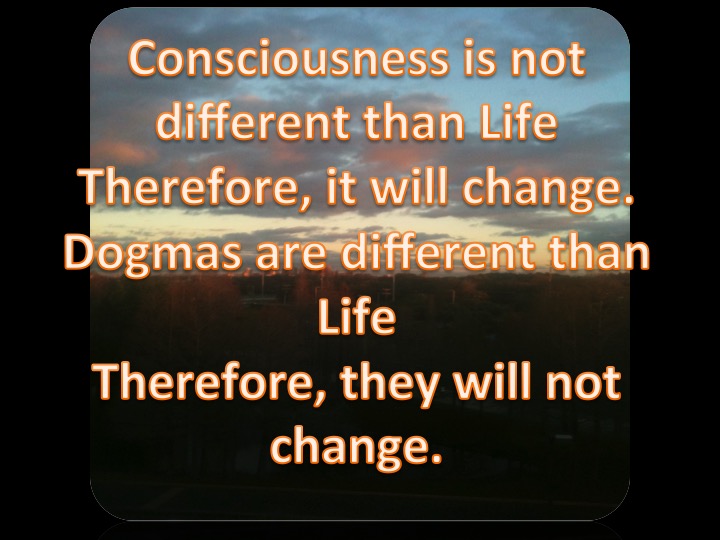 To understand (non intellectual) the depth of that “I” in our everyday Life is to regain awareness and to experience a different consciousness.

The classical example is about the individual who “renounces” the worldly power, wealth, name and fame to embrace the “divine” Heaven, God and Angel mind set.

From the viewpoint of consciousness alone, it is the same consciousness just deferred to a seemingly different goal, but it is all about the permanence of the “I,” in this Life and “after” this Life.

That consciousness is still full of “I.”

Let us say that this individual joins a religious group due to an “out of the world” experience which makes him feel “special” and a “chosen one” (more “I” ) or for whatever “reason” we could think of.

This individual full of “I” will use the “office mentality” paradigm (That is what he has been taught) to climb up into the religious setting, for a position that will be well regarded by his peers. Rather than be called “Doctor,” he may be called “Great soul.” Eventually, becoming a dedicated “follower” will bear its fruits in some “benefits” in this Life.

Let us say that this individual for whatever “reasons” later on decides to leave that setting.

Let us observe that the state of consciousness of this individual is still the same. The sense of guilt of doing something “wrong” will be experienced to the same extent and intensity as his previous dedication to that religion.

If the ego of that individual was hurt in his religious experience, then obviously rage and hate will be the response as a reaction.

Do we understand why to be secluded in a box of dogmas becomes important for a religion?

Because consciousness changes all by itself, through the assimilation of Life experiences.

Why is that?
Because Life is change. We are not different than Life. The static “I” is truly one of the biggest illusions.

This example used for a religion, could be used for many things in Life.
To belong to a political party or to show adherence to a particular cause, etc. All of those require for the individual to commit to a “box of do and do not’s.”

Many readers may be reading these things just to have further “reasons” to get out of a certain condition in their lives.
That could be a religion; that could be something else.

For whatever you “decide” to do, I’d like you to be aware that to cheat yourself may not be “desirable.” If “reasons” got you “In.” Reasons will not get you “out.”
Consciousness will. Awareness. It is automatic when the time arrives.
Nothing is static in Life. You are not different than Life.
What you believe to be “you” is what is holding “you” back.

Consciousness cannot be changed at will. The “I” wanting to change “my” consciousness is an illusion.
Just allow for the experiences of your Life to be the teacher. Be open to that possibility.

There is no doubt that the strength of that “I” is the one not allowing for change to occur, even when the heart calls for it, even if our feelings are hungry for newness.

“The world will get into a new state of consciousness.”
Yes. But man and his teachings are not causing it.
Do we see that?

Have you heard of “Crystal children”?
They are not “made.” They are born like that.
Consciousness.
When we realize that things manifest according to time and according to our readiness, then there is no point in rushing for a fruit in a tree to “make it” ripe quickly.
Just enjoy the moment, enjoy what Life brings. That episode will change if that “I” allows it.
Balance, harmony with “what is” by opening up that closed door of the “I.”