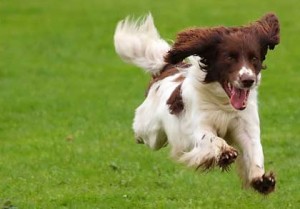 Ananda was sitting by the Seaplane Basin, a lovely spot to contact Nature.
In the grassy area near the small beach, a dog was running around as if there was no life but to run.

“Precious pup” was happily hanging his tongue in its mouth and barking a the birds nearby, then “Precious” would smell the vegetation, run some more, bark here and there and you could see and feel that energetic, overflowing happiness all around “Precious… “

The owner of “Precious”, Mr. Smith; was a very busy man. He was reading stuff in his latest I-Pad in the middle of such beautiful scene of Nature.

“If Precious had a “great” mind of its own, Precious could be as smart as a human being;” Ananda thought.

Rather than to run for the fun of it; Precious could come up with something “better.”
How about competing with “Rufus,” the Labrador across the street?
Precious is just a mutt according to his owner, but “Rufus” has some pedigree …and Precious “thinks” that he is a better runner.

Precious even came up with the idea of making a flag to represent the “Smith’s household,” in that way everyone in that house could feel as a “team” against the “Parker’s” represented by the “amazing” Rufus.

“Precious pup” versus the “amazing” Rufus; was a headline in the local newspaper that Precious wanted to see.

Precious pup thought that the winner should get a “Golden biscuit” sponsored by “Mom and Pop’s bakery.”
The picture of the winner will be featured in the box of the next batch of biscuits… Everyone loves to be with the winner… and that means business for “Mom and Pop’s.” 🙂

“Precious pup” decided to start a serious training regime… Now the fun was over. He finally had a “purpose,” other than lazy enjoyment. 😦

This is serious business… just like his owner has taught Precious… no time to feel enjoyment for the sake of it, no time for existing in the reality of Nature… when the “mental human world” is “reality” for the “majority.”

Ananda reflected on those wild thoughts. Isn’t that what our society has already arrived to?
Competition is “fun” – “They” say; but then “They” say that “winning isn’t everything. It is the only thing.”

We have changed the experience of enjoyment as doing something for the sake of it; to the mental concept of enjoyment through the achievement of a goal.

In that mentality, obviously all that matters is the end result and there is “fun” only when we “win.” Our society moves under this premise not only in sports, but also in business,(Survival of the fittest) in our beliefs in the afterlife (Heaven is for the few, the winners) and in the way we could raise a child, creating dysfunctional personalities; for there is no competition in Nature, in life; for otherwise there is no balance.
Nevertheless, we created that world, we bought the idea. We believe in that.. therefore that exists… it is “real.”

When we are “brain washed” in that way, we cannot possibly experience enjoyment and appreciation of the moment, the present; but we are only concerned about the future; what is to come next for me? How do “I “arrive there? What do I get out of it?

See that all of those questions are truly building up a personality, which thrives in a never-ending mental cage… Enjoyment cannot be found there at all. The mind has to be free to enjoy.

Intelligence resides in the realization of that “game.” It is not about being “against that game” for that entails to be still in the game. It is about realizing it, to enjoy it for what it is: a mind game. That is all.

Some people figured out that there is drinking water scarcity, that climate is changing unexpectedly and with that a new pattern for wildlife is being created. Natural resources are being utilized more than ever, population is growing exponentially using up all of our resources, etc. etc.

Some people concluded that we are destroying our planet by depleting it.

These people see that a nuclear war could be started at any time. There is fear for destruction.

Then, you have the other side of duality.

Those who claim that all of that is “nonsense.” There are no “proofs,” for any of that and those observations come from negative and mentally handicapped people, sensationalist trying to make “a dollar.”

As a matter of fact, these people see the world as a better place to be. They argue that we have more comfort, more technology which is capable of solving all problems. The statistics of life expectancy are going up, there is life insurance, medical benefits, education and TV… the forces of the “market” are decisive in the economical growth of nations, so all efforts should be made to encourage further use of natural resources of the planet, which are plentiful.

The masses, when listening to contradictory versions, will go for the easy ride and just watch cricket or football instead. Entertainment is good!
Who cares about those things when they have a job, a family and pets to take care of?

Just in case, Mr. politician will come to help out. “We should get together and come up with plans to solve any situation which could affect the future and well being of our children. We should remain united, for our children are the future of our nations.”

Applauses and ovations for such a “great solution” are expected. That guy, really knows what he is talking about. It is about time to get that sort of solution. He will be elected again.

In the meantime, Religions will talk about “doomsday.” It is time to forget about the world and think about the after life. Be good. Do good and leave the rest to God. Keep praying.

While people keep thinking about “making changes,” and “doing things,” to save the world; others are busy destroying it to maintain the “holy” forces of the economical markets going. The law of “supply and demand” is more important than any other law.

That is an example of unity.

In the meantime, some may sit and relax watching how nighttime changes into daylight.

No matter what people “want to do,” no matter what “upgraded” technology people has, still daylight will come. It is just a matter of time.

It is just the game of the night changing into daylight.
Do not get scared by being trapped into more dualistic words.

All is good for eternal beings while playing their role. Just a role. Roll on! 🙂